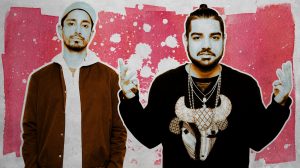 Swet Shop Boys have released their debut full-length album Cashmere – an album that is as much of a celebration as it is an act of protest. The group is a collaboration between Indian-American MC Heems (of Das Racist) and Pakistani-English actor/MC Riz Ahmed, with the UK producer Redinho providing a melting pot of South-Asian samples and hard-hitting industrial instrumentation.

“Phone Tap” (like all the songs on Cashmere) has very direct subject matter to address, in this case it is the threat of invasive surveillance and deportation in a post 9/11 world. The subdued instrumental features only a handful of sounds and you’re forced to listen closely to the forthright lyrics such as “no new friends in case they’re undercover snakes / stares on the plane, guess it’s just another day” and “if your skin’s tan they’ll shift man so no slacking”.