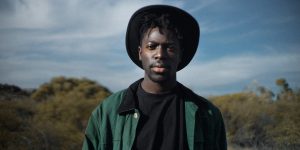 Moses Sumney – the incredibly-soulful LA indie folk singer – has released a stellar new single and video to go with it. The song features only sparse but hypnotic organic drum sounds, and layers of his autotuned vocals in a style reminiscent of James Blake‘s vocal compositions. Melodically, the vocals follow a heavily-gospel influenced style appropriate for the unaccompanied performance.

The video adds even more power to the song and makes it almost inseparable. Both the song and video are so spiritual and moving that it makes it hard to just hit play once.