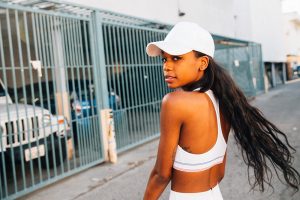 The latest release from the young producer/singer ABRA was a bold step forward. Despite only being 6-tracks long, PRINCESS was released through XL Recording’s sub-label True Panther Sounds rather than the eccentric DIY Awful Records camp that she’s made herself known through.

But this change of label for ABRA doesn’t mean any type of aesthetic change, in fact she takes her sensual R&B down even grimier paths than before. The instrumentation of “Big Boi” is reduced only to a bassline and drum beat to focus on the echoing of her sulty vocal runs, the assertive spite in hers and Tommy Genesis’ verses, and the ominously layered choral vocals that creep their way into the mix. Other cuts on the E.P. display more of an art-pop sensibility, but “Big Boi” is a dark and sleazy hip-hop track that shows her place in both worlds.