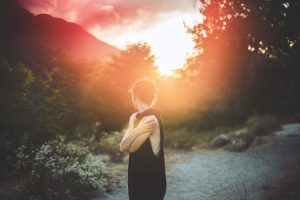 The LA based sound designer & vocal experimentalist Katie Gately is back with a new single, and an album to be released on Tri Angle Records in October. In her track “Tuck”, Gately creates a mood that is simultaneously menacing, poppy, chaotic, and glittery. With an incomparable level of vocal layering and manipulation, Gately effectively warps her own vocal performance into a twisted version of itself.

The hauntingly irresistible sounds of brass appear throughout the song, and are treated much the same as her own vocals – as an element of pop accessibility in anyone else’s hands, but here they become intoxicating and ghostly. From the moment the track begins you are engulfed in a spiraling trip, being led through the paranoia by a mysteriously transient voice that never quite reveals it’s true nature.