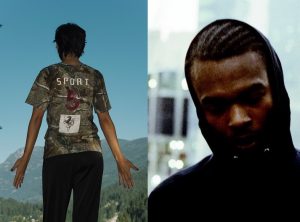 As part of the trio of Slam Dunk E.P.’s by Sporting Life (producer for Ratking, R&S Records), the NYC based artist has linked across the Atlantic with UK producer Actress for this remix. While still heavily featuring Evy Jane’s original vocal performance, Actress eschews any elements of R&B that are present in the original song. Instead, he creates a darker atmosphere for Evy Jane’s previously-romantic vocals with pulsating bass and cinematic string synths.

This is a dense, moody and unsettling expression of the desperation in love with a subtly morphing instrumental that brings out a completely different meaning from the original song.